Just a quick post to say that I'm still hanging around.  Too triflin' to make a decent post.  I keep myself busy making sure the house doesn't turn into an episode of Hoarders, while making lots of time to read, make jewelry or do needle crafts.

Since I don't have the gumption to take a picture of any of my current projects, here is a repeat of a watercolor still life that I did several years ago and then lost the painting. Sheesh, I need to get better at organization and stuff. Less time reading, ya think? Nah... 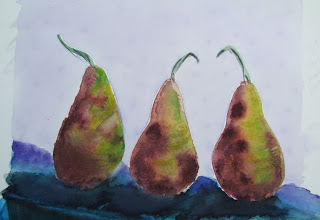 Speaking of reading, after months of putting it off, thinking that I had to have a special device to borrow an e-book from our local library...I finally figured our how to do it.  All I had to do was download a free  Adobe reader to my computer and I have access to lots of free books to read.  I was hesitant to get a Kindle because I'm so funny (funny peculiar, not funny Ha Ha) about what I like to read, that I didn't want to spend money on something that I wouldn't like.  Enter electronic borrowing. Not only can I borrow a book for up to 2 weeks, I can also download a preview of the book to see if I'll like it.  I don't know if you can do that on an electronic reader, but this is working for me.  This is probably old school by now, but hey....I'm old.

I hope everyone is having a good January. We haven't had any snow yet, and actually just a few days of below freezing temperatures.  I'm OK with that, it's just that when it's overcast and the sun doesn't shine I just feel so un-motivated.  I try to go to the gym five days a week, but this week I only did four days.  The hubby hurt his elbow several weeks ago doing something, he's not sure what and it seems that every time he goes to the gym, he ends up in discomfort for the next few days.

Anyhow, that's what's up with us.  I'm multi-tasking like crazy. Fitting in all my reading and artsy endeavors while I surf the web on sites like Pinterest (Pinterest is by invitation only, let me know and I'll hook you up) and StumbleUpon and still remembering to feed the hubs and myself along the way.

So I'm off to plop myself into a chair, fix a cuppa and do some reading.  We'll talk soon, I promise. 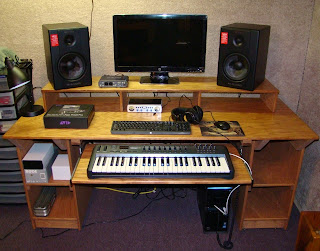 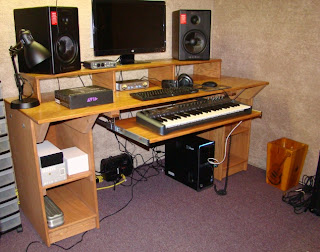 Ta Da!  He finished his studio workstation.  You may remember the initial photograph that showed him out in the back yard starting on this project.  Well, as you can see, he persevered. He designed, built, stained and polyurethaned the desk.  I was really happy that he allowed me so much input, as this was his project, after all.  I suggested the oak for the top, as well as the color of the stain.  I gave him fine grit sandpaper and a tack cloth from my stash of supplies and I think I was even instrumental in him using foam brushes for the first time. He loved them.

While he was occupied with his desk, I had time to think of fun projects around the house.  We had the perfect place in our dining room for a little reading nook.  Yesterday I browsed around a bit on the World Wide Web and found a chair that reminded me of how much I like to rock.  My Grandmother was a rocker and I always read and rocked when I was a teenager.  I found one online that I liked, so we went to a local furniture store to see if they had something similar. 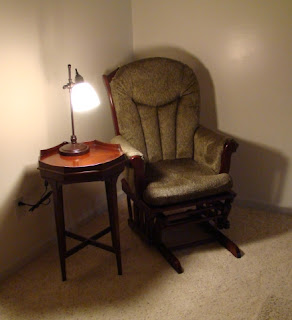 It's a rocker and a glider combo.  There were some that were just back-to-front level gliders, that I liked, but this one, is an actual rocker on a fulcrum type mechanism, as well as a glider. It takes very little movement to get that rocking motion. It is so cozy and comfy, and it's my favorite shade of green. We found the perfect lamp at Home Depot and now, after making sure all my chores are done, I'm going to chill out and read for a while.

I made several really nice pieces of jewelry this week, but I'll save those for the next post.  Hope everyone is having a great week so far.  Remember, as always, stay creative and enjoy yourself and we'll talk soon.
Posted by Susan at 6:42 PM 9 comments:

January is upon us...

Man, I cannot believe that another year has passed.  Shucks, I can barely believe that two weeks have passed since my last post.   Hmmmm, what have we done?  Well, the fridge went out and we attempted (unsuccessfully) to live out of coolers in the garage until the repairman arrived. 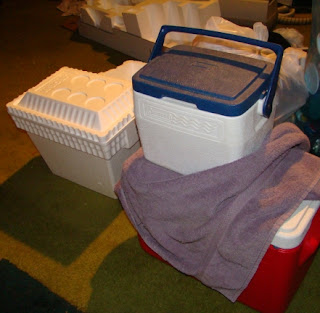 Fortunately, the repairman had the necessary part for the fridge and we were back in business.  We did have to toss out the food that I tried to keep, but the weather got unseasonably warm here and no amount of ice was going to stave off the botulism.  Gave the fridge a thorough cleaning and off to the grocery store we went. So we're all stocked up again and the fridge is sparkling and working like brand new.


The hubby wanted a new desk for his home studio and after numerous (probably five or six) visits to the few furniture stores that are in our area, I convinced him to build his own.  He is a residential carpenter by trade, specializing in trim, so I knew he could do it. He has built shelves in the past and did a great job on them. He spent several days on the internet, looking at plans, and YouTube videos and decided not only to make his own workstation, but to video the procedure.  Here is a quick shot of him in the initial stages of building the desk. 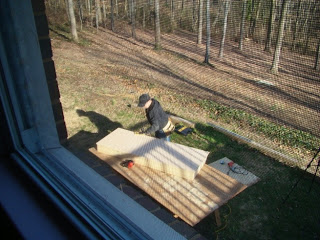 While he was doing his research on the desk, I was getting together a rather large order from Fire Mountain Gems.  I usually replenish my stash several times a year and FMG had such a good sale going on that I really racked up the items for under $200.00. 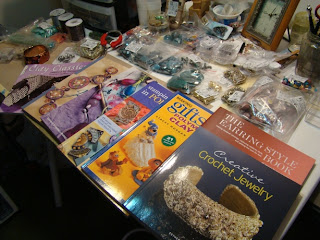 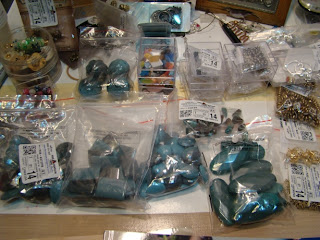 lots of beads that looked interesting. I also got "findings", those little bits and pieces of metal that go into making jewelry look professional. Crimps and clasps and eye pins and such.

I made two bracelets this weekend and 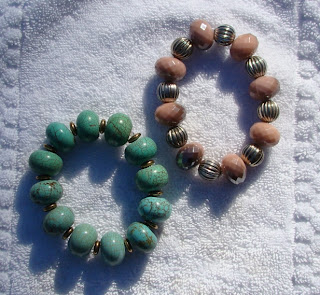 I also strung together some spotted jasper donuts for a simple necklace that works so well with the black long sleeve knit shirts that I seem to live in lately... 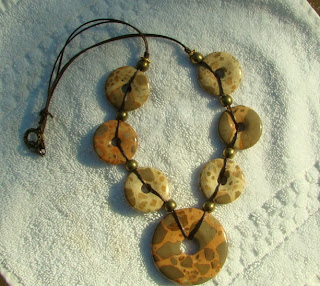 I also put together a faceted plastic necklace that is very lightweight, but will definitely fill the bill when I need a bit more sparkle... 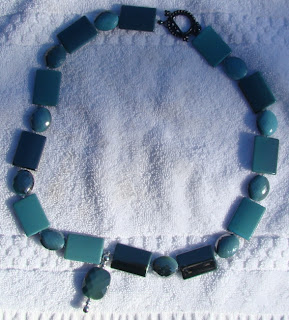 Of course, this picture doesn't do this piece justice.  It is very reflective and has the look of hematite in a plastic bead.The beads are reversible Not my usual type of design, but I like to at least try to step out of the box sometime.

Well, that's it for now.  I'm hoping that everyone is having a great first week of 2012.  Keep doing your art, staying creative in whatever manner is you.  Staying true to yourself doesn't mean doing the same thing all the time, unless you have a certain style that your livelihood depends upon.  If that is the case, you can always branch out some, just for yourself.  Like I said last time, it's ok to get your groove on, but stay out of that rut.