Don't you love it?

Ahhh, that old catch phrase of Paris Hilton.  It really says what I want to today.  Here are a few new shots of the ongoing remodel... 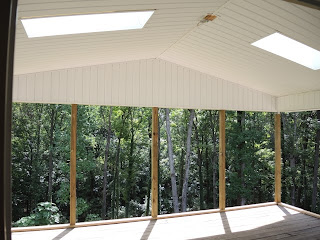 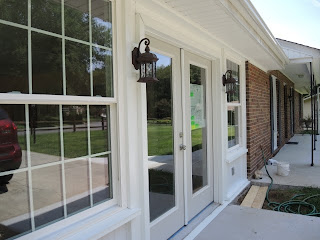 After having completed the work of bending the metal to wrap the front door opening, they will soon caulk it and call it finished.  Several coats of paint on the door and the picture will be perfectly framed. 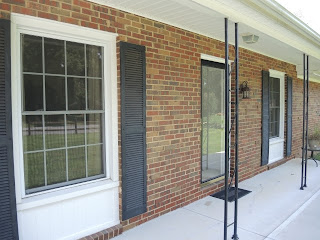 I had them replace the dated panels under the windows with the same cedar tongue and groove that they used on the studio and I am really pleased with the results.  The other was soooo 1970.  I really like the change up of the porch light, just another bit of continuity that is making this remodel so smooth. 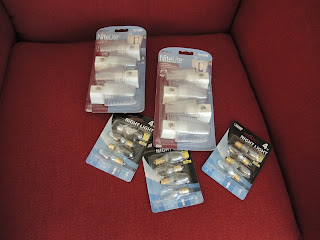 Last but not least, here I am showing a picture of eight extra night lights that I found in a Lowes bag this morning.  My crazy coot of a dead husband must have had plans for these, but who knows what that was.

Well, with that being said, I hope you like my pictures today.  They are starting to seem so "same-y same same", but it is what it is.  Love you and we'll talk soon!
Posted by Susan at 12:38 PM 5 comments:

A little bit of this and of that...

A bit of this and a bit of that often adds up to something special.  Speaking of something special, one of my special readers reminded me last night that I really need to keep posting shots of the remodel.  I guess I was thinking that you only wanted to see the dramatic things and not the hum-drum things that are taking days to do.  Like the process of framing in the windows and bending the metal to encase them. 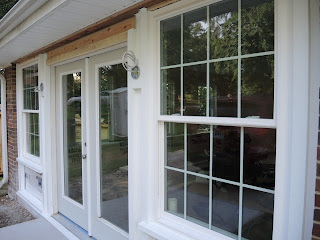 The bending of the sheet metal is done using a machine called a break. I totally loved watching them use it.  I'd seen one used before, but I had not added sheet metal jewelry making to my repertoire at that time.  Anyway, by this time I've gotten to know the gentlemen well enough to park myself in a folding chair and watch the process up close.  We talked about sheet metal tools and they showed me some really cool hand tools that they use that would easily translate into jewelry making tools.

In the lower right corner of this next shot you can see a portion of the break. 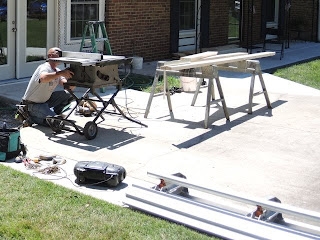 It is quite a large piece of equipment and it takes two people to move it about.  I wish I had taken a shot of it when it was inside, but I didn't.  They may bring it back Monday, I'm not sure.

One of the things that can bring a job to a standstill is the all knowing and ever feared Building Inspector.  My general contractor (GC, I'm told) is a perfectionist, almost to a fault, but he still always acts like the big, bad inspector has some magic melting dust that he is going to scatter if things aren't just so.  So I'm happy to report that I haven't had to resort to idle promises (think The Sweet Potato Queens) or sway seductively in order to expedite the passing grades that we keep getting... 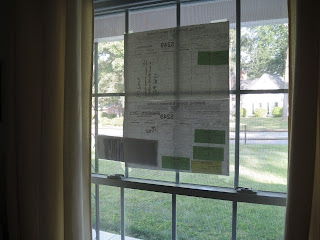 I didn't exactly sway yesterday when Needy Ronnie and Sly Jose called me to see the progress they had made on the ceiling, but I did bounce up and down with glee when they showed me the first panel after it was installed. 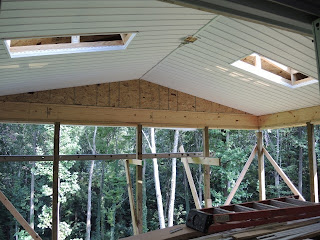 Hmmm, I just realized something, while there were no tassels with the bouncing, this duo immediately busted hump and got the entire ceiling done.  Perhaps there is something to be learned here.

I know that none of the carpenters and such read my blog so I'll share some of the names that I have given to them.  There is an electrician that I refer to as the Serial Killer.  He is decidedly odd.  The floor guy has been silently dubbed Anger Management because he told me, after getting peeved with the plasterers for taking a step on the tile floor "ten years ago I would have just shot him for that".  One of the plasterers, who appears to be about 70 years old, has been aptly named Animal because I could hear him talking about being up in the club over the weekend.  Animal's helper (who reminded me of Refrigerator Perry), should be called Jerry because he kept doing an exaggerated Seinfeld voice and quoting lines from that long ago show about nothing.  I'm telling you this has been a wild summer.

Oh, this is funny...day before yesterday I finally called Jose out.  He was up in the truck bed ignoring Ronnie and acting like he didn't understand English.  I just stood there in front of the crew, who were almost rolling around laughing, and told him "I've got your number Jose, you act like you can't speak or understand English when there is something you don't want to do. You might be able to fool them with that act, but I know what's really going on."  Funny thing, the next day I had a semi normal conversation with Jose about the house and how he thought it was nice and he didn't try to Pigeon English me once.  He knew that I knew and it was funny.

Sorry, I had a shiny moment there and went off in another direction.  Getting back on subject, here is the light I chose for the front doors... 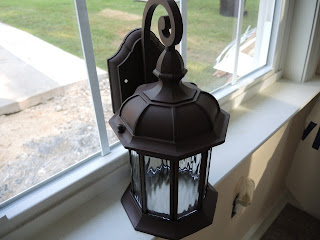 My main criteria was that I could change the light bulb easily and that it be a standard light bulb and not a flame shaped specialty bulb.  I think this now means a new lamppost for the yard, but I have already gotten business cards from these guys for handy man jobs just like that.

One thing for sure, a large remodel like this is good for the neighborhood. In addition to getting more business for my guys, people are having fun watching the proceedings...AND now that everyone knows that I'm not some poor shrinking violet widder lady, they are backing off with their suggestions and letting me do my own thing.  My own thing will also include a new driveway and then it should almost be done.  The screen room is going to be the last thing finished, but I think there will be a few more days that will be warm enough to enjoy it.

All is going well and I'm trying to stay mellow through all of this and for me cooking really helps me mellow out.  The new kitchen is wonderful and I'm already whipping up fun dishes like this combination omelet. 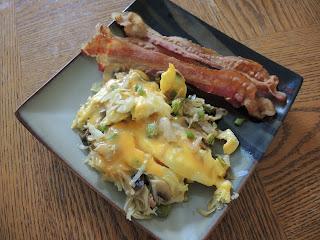 I used a small square plate for this presentation, not extra large bacon and a pile of eggs.

I chopped and sauteed fresh mushrooms, onions, green peppers and grated about half of a red potato into the skillet and let it cruise on low before adding the beaten eggs for the omelet.  I love eggs, they fill you up and when I don't add bread to the mix, I don't feel stuffed or yucky from eating too much.

Well, that's it from me for today.  Have a great weekend, y'all and stay cool.
Posted by Susan at 1:19 PM 6 comments:

I still don't have any really great photos to share regarding my remodel.  I'm finally at that stage, where little finishing things are being done and you really can't see the dramatic differences that you could see earlier.  So just for grins and giggles I'm going to post a few pic of flowers that I've been taking this summer as reference photos.


I'm also playing around with the settings on my blog to see if I want to change anything...


Well, that's it for a while.  Hope you enjoy the color.  When things start progressing again, I'm sure I'll be back with more pictures that will knock your socks off.

My sister, Peri and her wife Peg lost their sweet baby girl cat Ishtar today.  She was over sixteen years old and was a sweetheart of a cat. 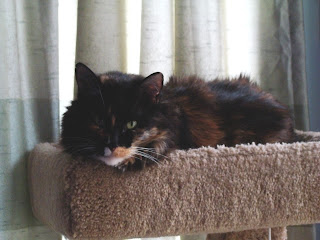 She will be missed.

That's really all I can type right now.  Darn, this has been a long year.