I'm not wishing my life away, but I am ready for Spring.  I don't have much to post tonight, just a few selfies and some other stuff... 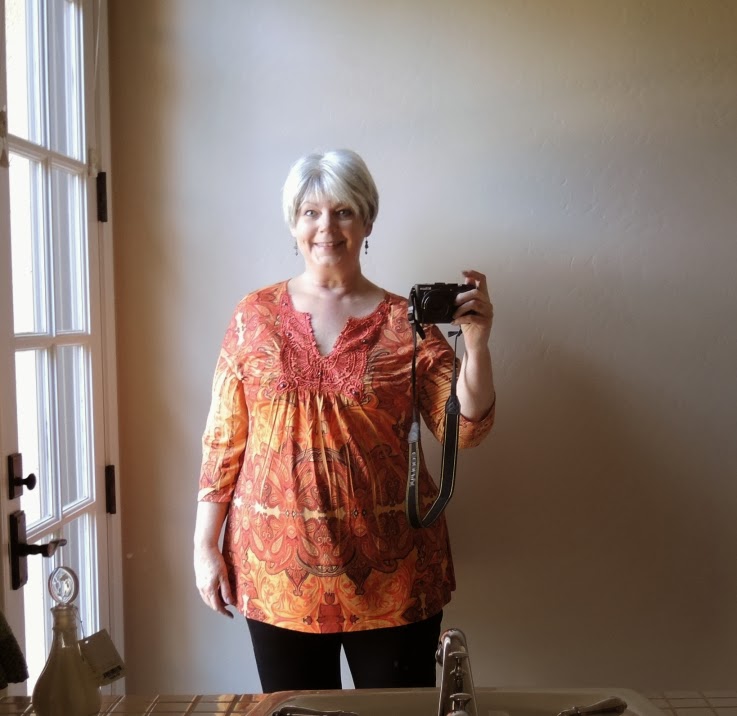 As you know I spent a week with my sisters in San Diego.  I took selfies there  (it's what I do) and you will notice that I apparently wear this orange blouse all the time.  You see it here in the sunshine of California and you see it here as I wallow in my new shoes that we shipped home... 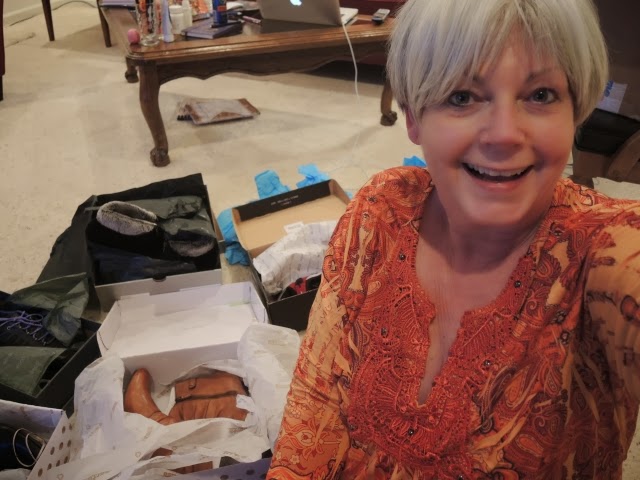 You see it yet again, as I show you the blue sky that contributed to the melting that finally went on here after the snow... 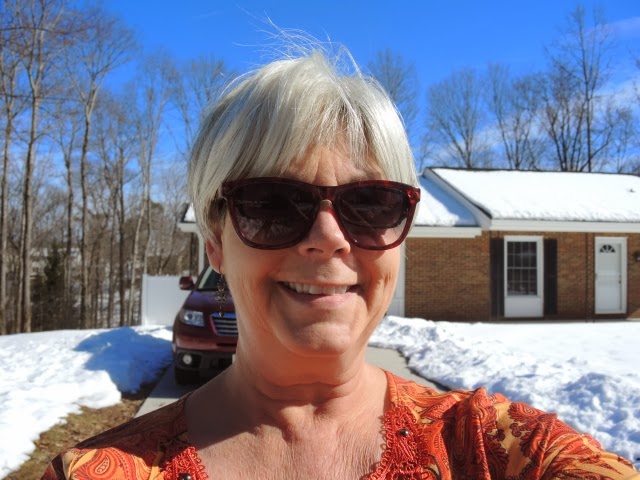 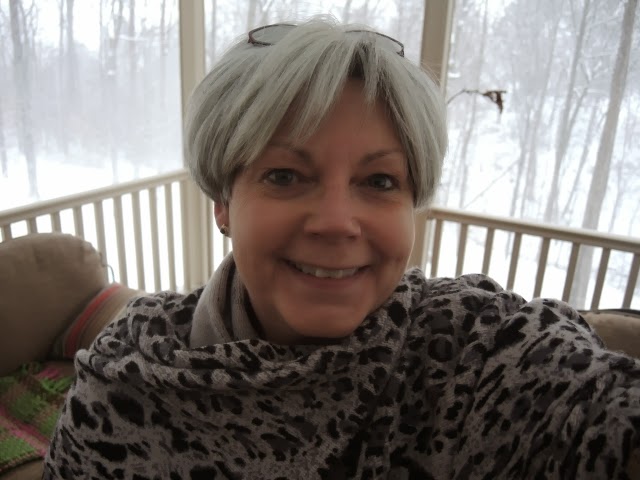 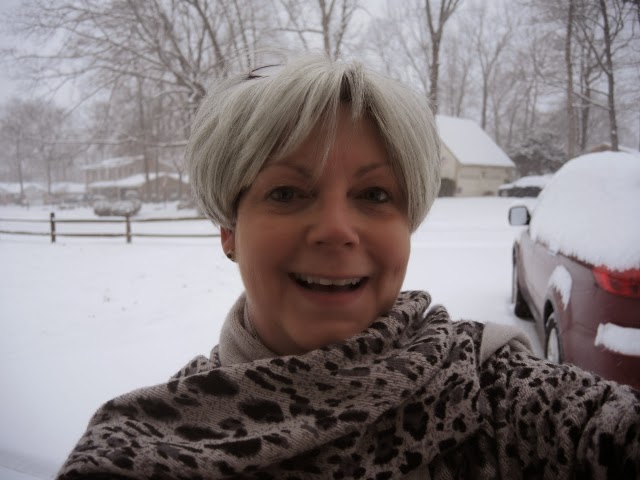 I'm pretty sure I was wearing it in both of these snowy shots that I took before I was attacked by food poisoning later this snowy evening...

Here's a fun selfie that I took back in California... 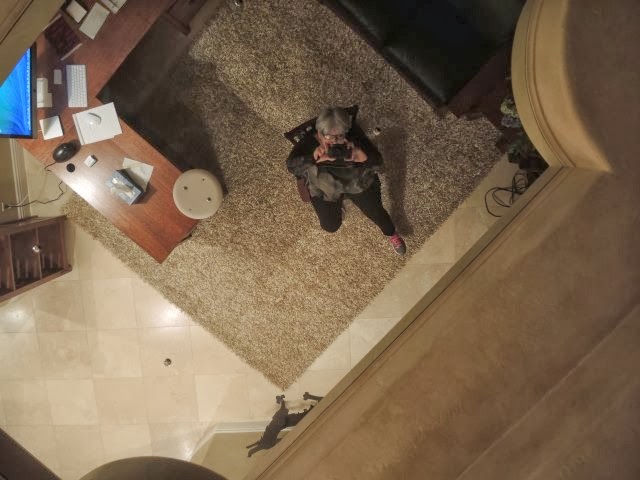 In this shot I'm wearing my newest favorite shirt that I got when Peri and I indulged in a bit of retail therapy at a shop called Fairen Del.  It's such an interesting shop and I try to always stop in for something new.

OK, enough about me.  Here are a few shots of some of the cool art pieces that Peri and Peg have in their home. 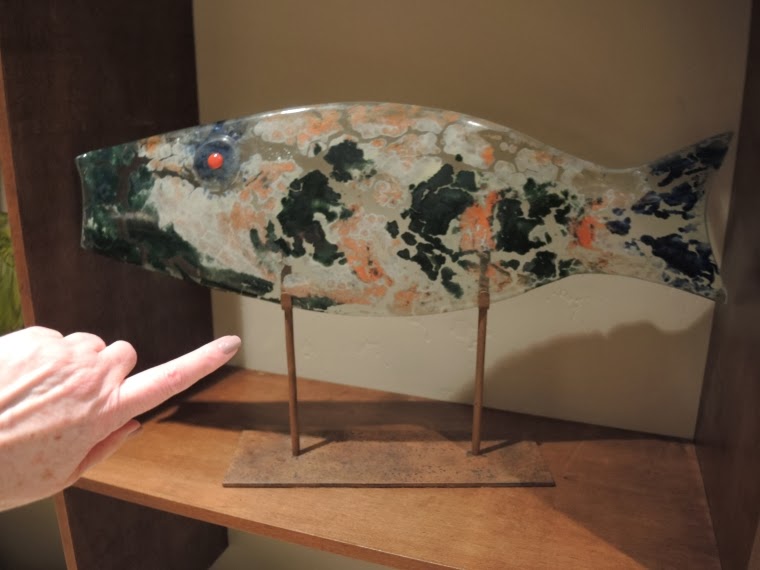 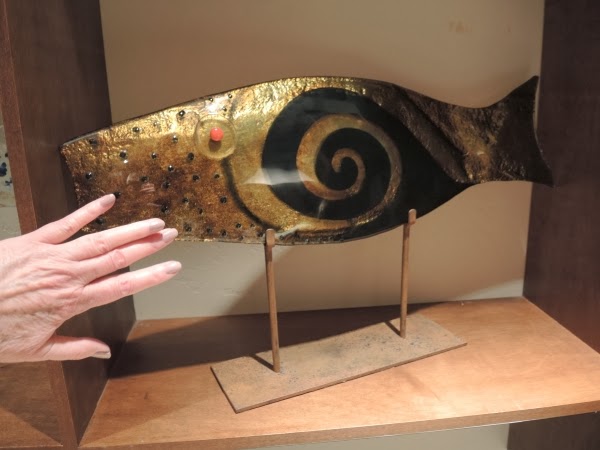 Here are two really cool sculptures...( I include my hand for size and perspective)

This is a really interesting piece... 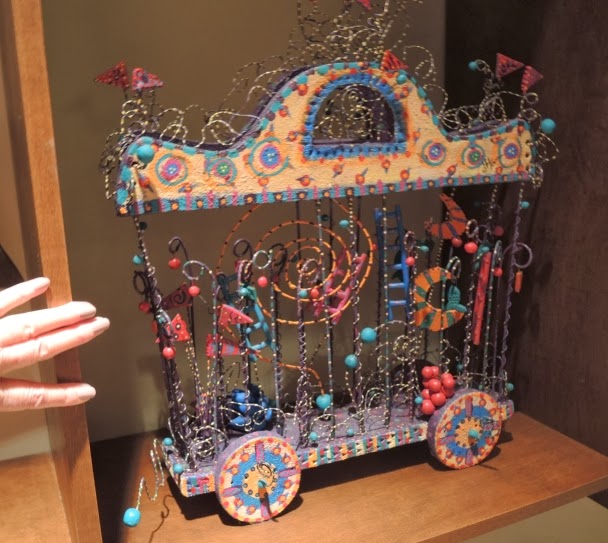 She has many other pieces which I will try to show you as the weeks go by.

Here is a mosiac piece that will certainly catch your eye... 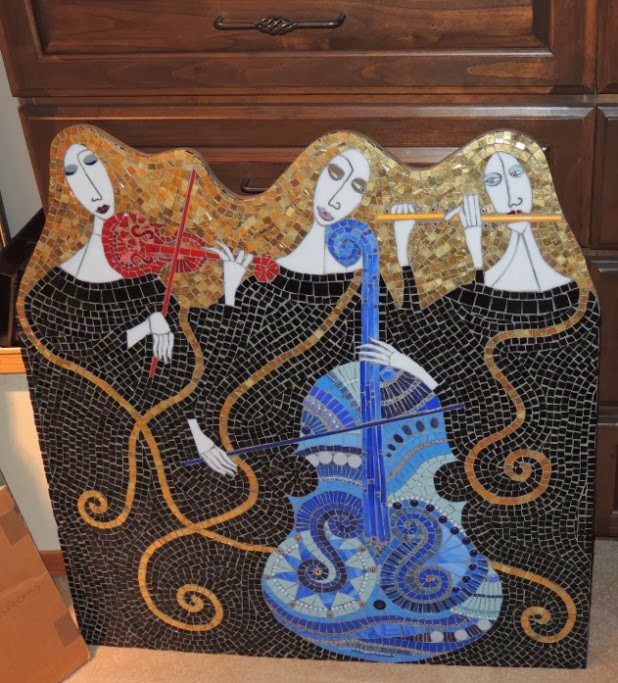 It has several companion pieces... 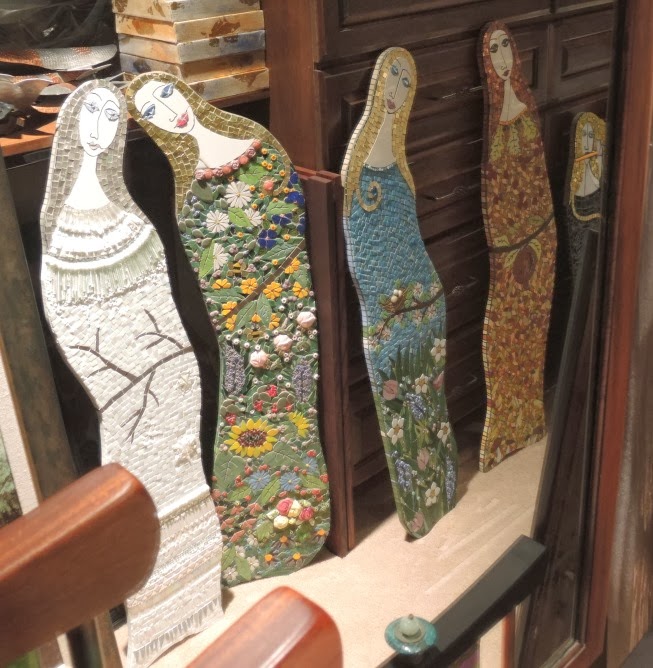 Peri is like so many of us are, her tastes in art are constantly changing and usually very eclectic.  She, being an artist herself, finds the art of others interesting and motivating.  Sometimes we fall in love with an artist's work because it reminds us of our own style, or perhaps because it is something completely different from what we do.

Whatever the reason is, most of us have favorite styles of art, be it jewelry, dolls, painting or quilts.  Art is in the eye of the beholder and I also love seeing what is out there.

Well,that's it for today.  I'll keep going through the hundreds of photos that I took, in hopes of finding something fun and interesting to show you.

Take care and stay safe and creative.
Posted by Susan at 7:52 PM 3 comments:

Oh My....what a week it's been here.  I fully intended to do lots of posting here showing the progress of the snow and going outside and taking pictures of what I was sure would be about 6-8 inches of snow. I settled in when the snow started about 2:30 p.m., right on schedule.  I sat in the snow/sun room watching it snow and eating everything that I could get my hands on.

Here is the first hour of the storm... 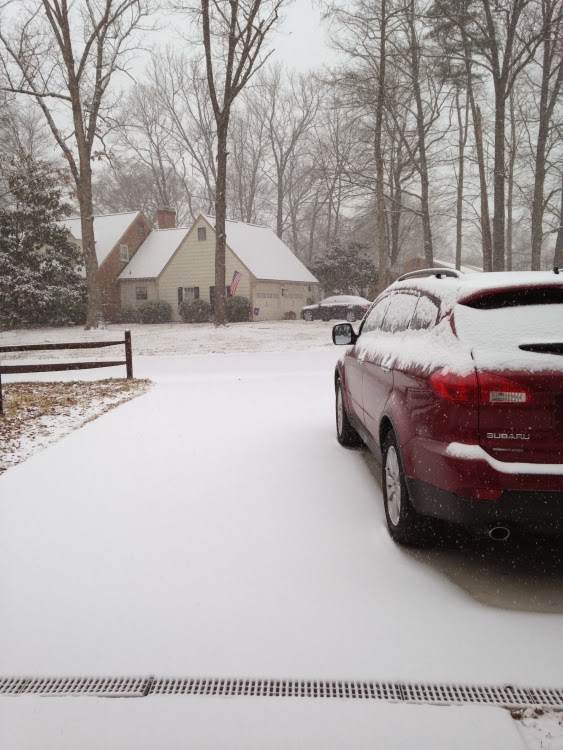 Well, my adventure arrived about 10:30 Wednesday night, after Chelsie and her boyfriend walked to my house in what was then 7 inches of snow.  It was cold and her hair was frozen and she was having a blast.  Ahhh, the enthusiasm of a nineteen year old... 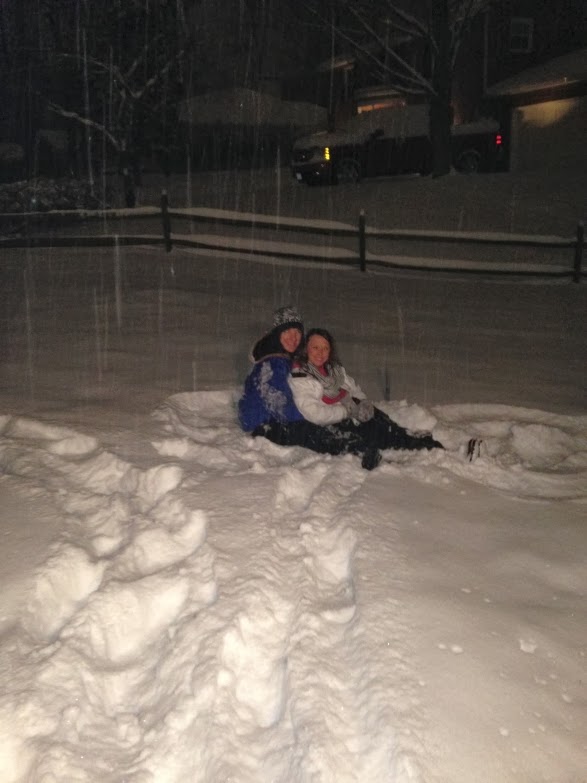 The urge to run to the bathroom hit me right as she and Jordan were playing in the snow and fortunately for everyone involved, they didn't stay long.  I began a very long night of being sick (both ways) in the bathroom.  I wont go into the details, obviously, but I was pretty sick.  Short version, it lasted all night and most of the next day, as did the snow.  We ended up with 22 inches. Ugh.

TD called me a couple times the next day offering to bring ginger ale or something, but I really didn't want any company at that time.  Later my next door neighbor showed up with food and ginger ale, I stayed on the couch until bed time and I made it through another night.

Friday I was able to get up and take a shower and blow dry my hair, which is probably why I didn't realize this was going on in the driveway... 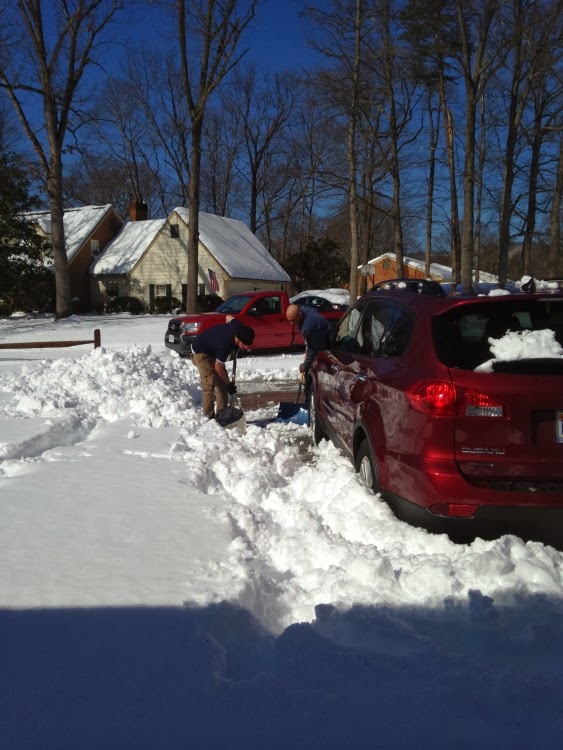 The sky was blue and it was about 55 degrees. The snowplows had to concentrate on the main roads, so these guys (TD and son) shoveled both of their own drives and mine and another one of their friend's.  They said to call when the snow plow came through so they could make an opening for me to actually get out of the driveway afterwards, but I'm slow to want to get out anyway. I know those guys must be sore today.

Well, that's my pictorial description of the snow.  I know that I fared a lot better than my friend Karin, who lost control of her jeep and had quite a scare.  Glad she is OK.

Now we have high wind warnings.  I'm so over this, just waiting for everything to get back to normal, whatever and whenever that will be.

Well, believe it or not I've been back from Cali for a week and I'm just now popping in to say hello.  In between getting back in the groove, going to the grocery store, meeting up with friends, anxiously awaiting the purchases that I UPS'd home (suitcase included) and doing laundry,  well, I've been less than motivated to make a blog post.

I thought it would be fun, though, to give you some of the pictures of the trip in the order that they happened.  I took so many that I think it would be tedious to continue on with that style, but for this post that's the plan.

Here is a shot of how lightly I packed. (sorry, the plastic bags are not supposed to be in this shot) In addition to the small suitcase, I stuck the books and such in my handbag/tote and I was ready. 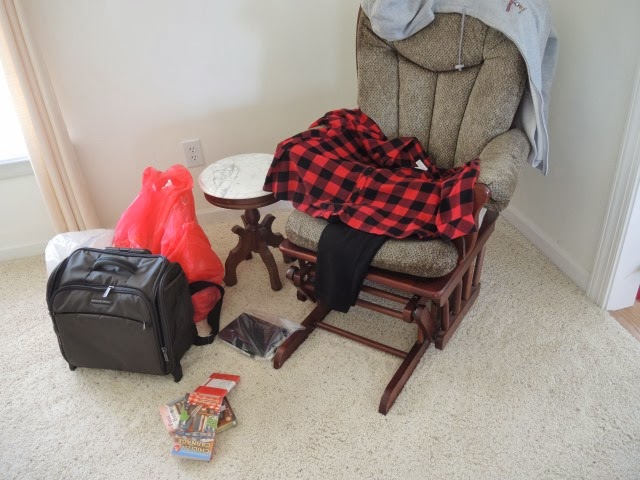 T.D. came to the house about 5:30 a.m. and had coffee with me.  We then headed out to the local airport, very close to us by the way, and he took my luggage up to the TSA area for me.  I had already gotten my boarding pass the day before to streamline the process.  He couldn't believe how I had packed and mentioned that he had never seen a woman go on vacation without a ton of stuff.  Needless to say he was impressed.  He also made a joke about the lumberjack shirt that I was wearing.  That dude, he's a laugh a minute.  (Later his daughter told me that he was so nervous about getting me to the airport on time that he stayed up all night, just to make sure he didn't oversleep)

The flight from Roanoke to Atlanta is only about an hour, so afterwards, I kept my self amused taking photos of the airport and such... 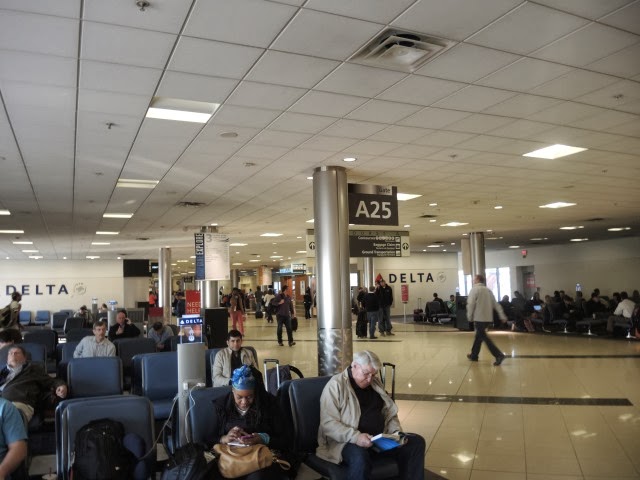 Here is a shot of some of the folks hanging out waiting for their flight.  I was able to take shots of people by acting like I was taking selfies.  Sneaky, I know. 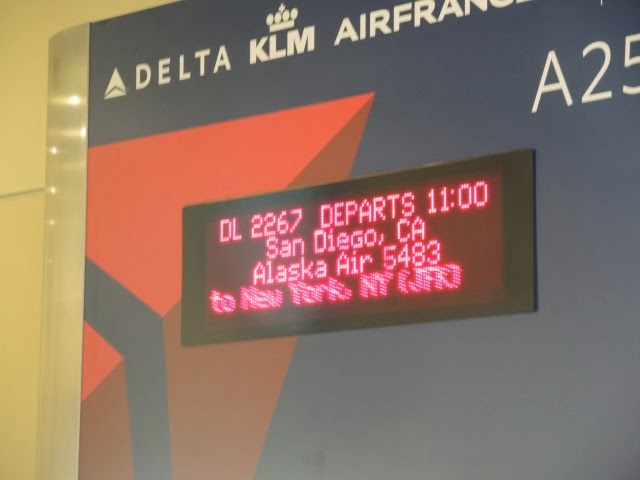 Here is a shot of the departure board for my flight.  Glad I wasn't headed any where on Alaska Air.  I missed the storm that hit this airport in Atlanta by a matter of hours.  Gulp. 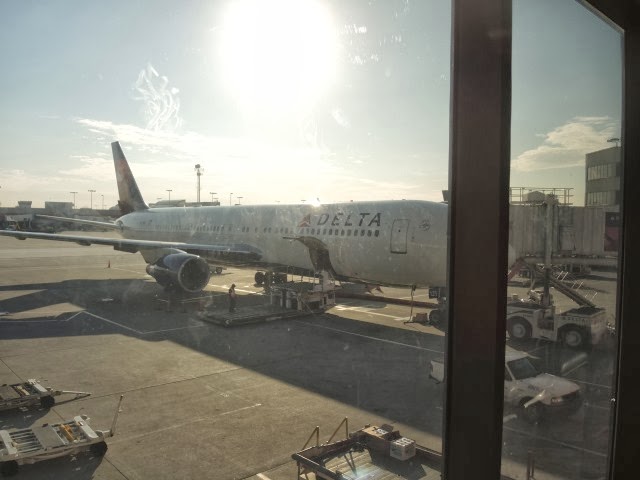 Of course, no travelogue would be complete without a shot of the mode of transportation...

The flight to San Diego was delightful.  I had a wonderful seat mate by the name of Carl Smith.  We talked and talked and really hit it off.  We had so much in common that we really enjoyed each others company.  He was headed to San Diego to speak at some sort of a seminar/meeting and said that he was going to incorporate parts of our conversation into his speech.  I'm still so surprised when I make an impact on anyone.  He was a really interesting guy.

Had I not had such an endearing seat mate, I would have take shots of the food, but photos of airport food are a dime a dozen, making a new friend is a one time event.

After I landed, I disembarked in the incorrect area of the airport, not knowing that the building had been remodeled in the last year.  Sisters and their driver Mark finally found me and we were on our way. 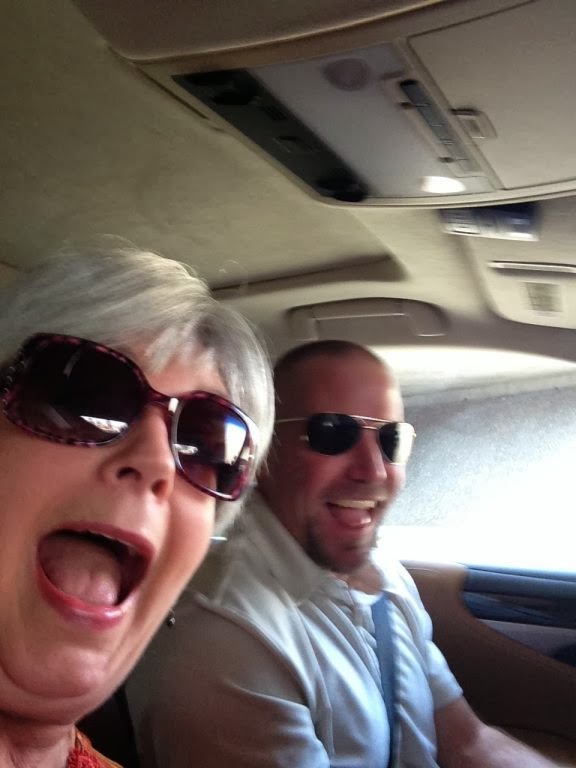 This is pretty much how it was when I was in the front with Marc.  He put up with my antics quite admirably.

After we got to Peri and Peg's I was raring to go.  Not tired at all, so Peri and I hopped into her new ride and off we went... 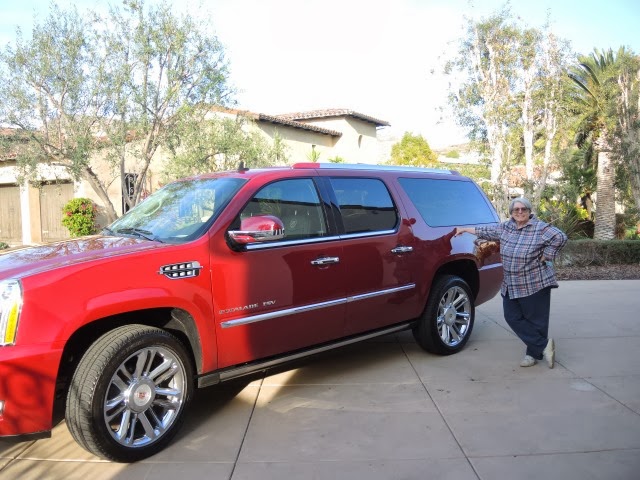 I was there for eight days, so I took lots of pictures.  In the next few posts you will see beach pics, pictures of homes, furnishings and food.  It was great fun and she is truly an amazing sister.  My sister-in-law, Peg is a pretty cool chick, too.  She had her arm in a cast the entire time I was there, but she was a real trooper.  She hung in there with us and when we finally offered her a day off, I'm sure she gave a sigh of relief.

Well, that's all for today.  There will be more to come.  We are supposed to have a really big snow on Wednesday, so hopefully if the cable doesn't go out, I'll have plenty of "down" time to make another  post.  I really want to post more often, I'm just such a slug sometimes.

Take care, friends and enjoy your life, whatever it is.  Love ya!
Posted by Susan at 7:10 PM 2 comments: