Well, now that they have been received, I can post the pictures of the crocheted stuffies that I sent to my sisters for Christmas.

You gotta love an armadillo... 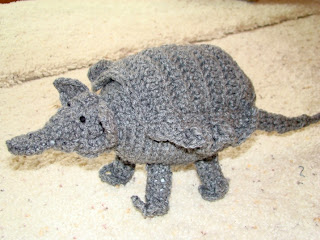 The armadillo was a project from the October issue of Crochet World.  It was my first time crocheting from a pattern and certainly my first time doing any sculptural crochet.  There was a bit of a learning curve and the tail of this creature was where I had the most difficulty.  I finally figured out what I wanted it to look like, but there was a lot of "non pattern" work that went into it. (That means I made it up as I went along)


You simply cannot go wrong with a cardinal and a little mousie... 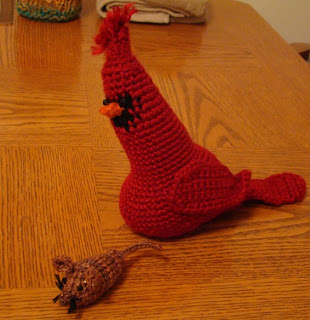 The little mouse was from a pattern in a special issue of Crochet Today called Crochet Gift List. I really learned a lot about crocheting figures and shapes.  Both were good magazines for learning.  After all, there are more things to crochet and knit than just afghans or scarves.  While I do love making both of those particular items, it was such fun to know that I could branch out, so to speak.

There is a bit of a story behind the cardinal.  I love cardinals and always have. They are such a beautiful color and they are the State Bird of Virginia, the state from whence I come.  That being said, let me share something with you. We recently lost a family friend in a car accident. She was a long time friend, an older gal that loved to be out and about. We were told by her son that she was slumped over in her seat at time of impact, so she probably had no knowledge of what happened.  Meanwhile out on the West Coast, very close to the actual time of the accident, my sister said she was visited by a cardinal, outside their house.  This seemed to be a female cardinal, one that she hadn't seen before.  We, of course, thought that this was a wonderful occurrence and like to think that, perhaps, this little female bird may have been somehow related to the passing of our friend.  The really cool thing is our friend's given name was...Virginia.  I'm sure that the little crocheted bird will be a loving reminder of our friend. I did it free hand, and while there were areas that could have been perfected, I think it will do just fine.

Well, I hope everyone had the holiday that they were hoping for.  Ours was a quiet one, which is our usual celebration.  We did go to a movie Christmas Day and saw Warhorse.  Pretty good movie, but Christmas Day at the movies is much busier that we had anticipated and there were some issues with that.  All in all, we have had a great weekend.

I'm looking forward to getting back to my usual schedule of going to the gym, NOT eating treats and generally getting back in my little groove.  We have been invited to a New Year's Eve party, but I'm really not crazy about going out on that holiday, so maybe we will decline that little soiree.

Well, stay safe and happy and get back in your own groove.  Remember there is a big difference in a rut and a groove.  Make that difference happen in your own life, you'll be glad you did.

Well, just a quick post to say hello to all.  Hope you are doing well.  I'm hanging in there, nursing a back muscle, that decided to make it's presence known in a big way.  I don't really know how I strained it (probably from lifting weights at the gym) but it is a nagging visitor that just wont leave.

Hubby just returned from his yearly delivery of Christmas envelopes.  Through out the year he routinely takes donuts to our friends at the dentist.  Since we have been going to the dentist for over a decade, we've really become friends with the folks that work there.  We know them and love them.  They are more than just someone that works somewhere. We share the changes in their lives...birthdays and graduations of children, as well as divorce and illnesses.

Anyway, when hubby went in today for a quick dental check up, he took the usual goodies and the Christmas envelopes.  Imagine his surprise when they brought out packages for us.  He was totally surprised and got verklepmt to be sure.

I got all teary eyed myself, when he told me on the telephone and then we both cried again when we opened the gift itself. It is gift basket from Fresh Market... 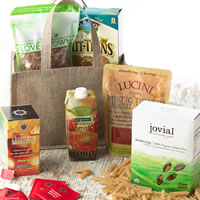 This was such a good choice for us.  They know that we try to eat healthy and that we go to the gym.  This is a bag filled with gluten free items and it is full, as you can see, with food stuffs that we will eat and not have to re-gift.

Well, that's it for now.  Hope everyone is preparing for a fun weekend.  Don't stress out over the holiday shopping.  Remember what your holiday is really about and take time to contemplate, meditate or pray.

I've finally made a decision...

I'm dropping out of the weight loss challenge at our gym at the half-way point. That doesn't mean that I've given up, it just means that I want to find a way to customize my workouts and not be at the mercy of a pre-determined generic workout.  I'm tired of dreading the sessions.  Everyone says working out is supposed to be fun.  Well, guess what...going out with your honey, that's what's fun.  Meeting up with friends where your hair looks good and you don't have to worry about passing gas in public because you are in a torturous position, that's what's fun. Meeting new people and not sweating on them when you shake their hand, that's what's fun.   Get my drift?

I tried to make the most of it, but truth be told, I don't give a rat's patooty if I never do another burpee or another mountain climber.  I'm ready to plan my own workout, doing the things that I do like so the workout will be less aggravating (notice I didn't say fun). I think I can still be fit and feisty if I do it myself.  This is the second time I've tried the standard trainer driven workout plan of bosu balls and crab walks, and this old gal is tired of people thinking she's a miserable old coot, because she doesn't think military style calisthenics are fun.  Maybe I just don't like being on a team, I've always been a loner type when it comes to doing things. Whatever it is, there are gonna be some changes made.

So all that being said, I'll keep you posted on how it goes.  I'm not saying I'm smarter than the certified trainer, I'm saying she's not certified in motivating and training a Silver Fox like me.  I'll show them, you just wait and see!
Posted by Susan at 4:16 PM 6 comments: