OK, I decided to re-do my old truck. Now the grass surrounding the truck is very dark, but I am going to have some light colored flowers sprouting up around the truck and I need those darks... 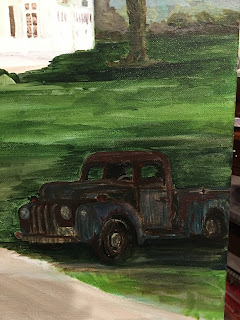 The hood shape on the truck isn't exactly what I want yet, but you get what I'm going for. I'm not sure if I'm happy with the inside of the truck yet either. I'll be refining the rusty areas more also, and I have since darkened up the color of the steering wheel.

As I continue to work on my painting, I constantly take pictures of my progress. This allows me to see the canvas from another perspective. You can view your work through a mirror and get a similar result. Taking pictures works well for me, plus it gives me a way to show you, my loyal reader, that my work usually starts out as a mess before it is transformed into a viewable work of art. 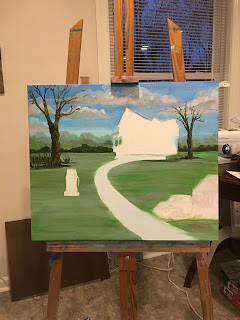 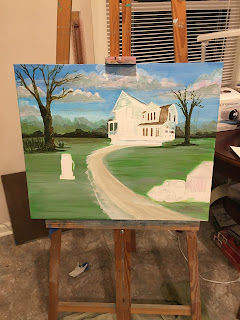 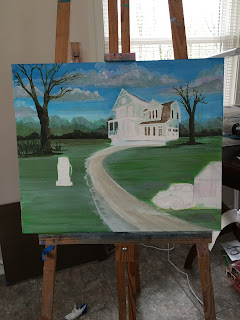 Often I will see something in an earlier version that I want to recapture and having done the progress pictures I can go back to what I did before. 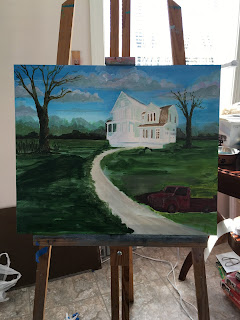 Here I am literally just slapping paint on the canvas to check colors and deciding the lay of the land. The direction and shape of the brush strokes can give the illusion of bushes or little hills.  I also decided to take out the shed in the foreground, as well as blocking out the gas pump.

I may put some bushes or rocks in the field below the house or I may even incorporate a rock wall somewhere. I like to paint cloudscapes, so usually I add clouds and I can do a nice rock wall. When painting, it's more fun to include things you enjoy painting and it helps to establish your own style as a artist.

throw some bling on it...

I have a friend who found a color copy of a watercolor painting and he has asked me to recreate it, but in a larger size. I have no idea what the size of the original was but this is what I have to go by. It's printed on a color copier on 11 x 17 paper... 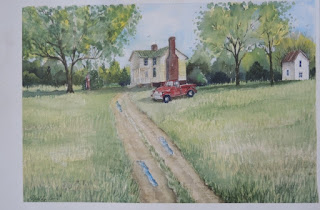 I have been walking around thinking about this project for several months now. More than just thinking, almost struggling with the concept of recreating a painting that I don't like. Don't get me wrong, I'm not really criticizing the painting or the artist, because it's probably not that bad. It's just that I don't like the style and because of that, I don't think it's very good. It looks poorly executed and amateurish and that may not be the case at all. It may purposely be done in a style that is supposed to resemble outsider art... I don't know, I just know I put my hands on my hips, pushed my bottom lip out and decided I don't like it. All that being said, I tried...I really did.

I did a quick color study of it...trying to capture that style 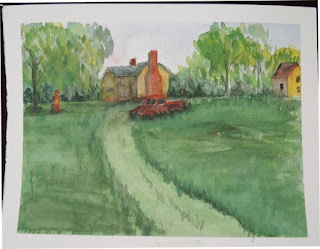 I also did a very rough sketch for enlargement purposes...shudder 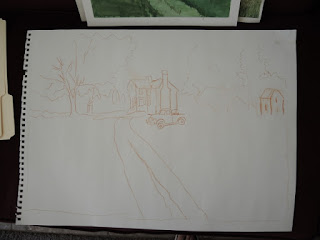 I think it was at this point that I realized I just wasn't feeling the painting...at all. If I'm not feeling it, it's just not going to happen.

I suppose that were I doing this as a commissioned painting and charging for it, well that would be another story. If all he wanted was truly a larger version of this painting, I could take it and have a larger copy made of it. I am doing this for a friend who likes MY art, but who also really likes the elements in this painting.  He likes the old truck, and the gas pump and the farm house and the landscape. It's possible I'm overthinking this entire thing. I have been known to do that.

Recently he asked me if I had started on it yet (he has seen two or three painting that I have done recently)and I finally just ask him if he cared if I changed it a bit, to which he replied "throw some bling on it", "heck, put a naked woman in it, if you want to." So, yes I was over thinking it.

I think I'm just going to do a painting, in my own style, that contains the elements that he likes about this... 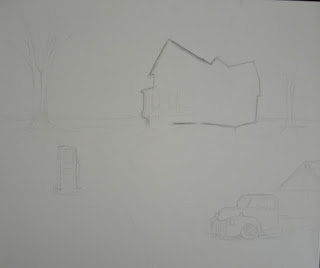 Here is what may turn out to be the final sketch, but who knows. I have drawn in the main elements on a 20" x 24" artist canvas. My plan at this point is to use acrylic liquid paint and build up the layers. This is very similar to the paintings that I did in the heading for this blog.  He actually has one of those paintings and he really likes it. As I said, who knows, the way I do art, I may do several more versions of it before I'm happy with it.

So that's what I've been doing art wise lately.  I'll try to keep you posted, so wish me luck.

Just thought I would show you the progression of my latest painting. I used a photo that I took in California this last trip as my reference photo.  My sister sent me some new pastels and I finally took the plunge and purchased a projector so I can easily transfer my photos to my painting surface. 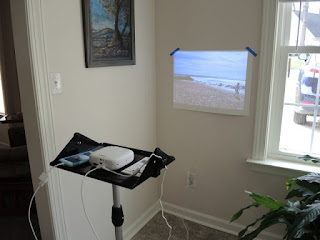 I did my research and got the one that I wanted and bought a stand and an adapter to use with my smart phone and I was up and running.

I  projected the image on a piece of watercolor paper taped to the wall and basically drew around the image onto the paper.  This is just for practice after all. 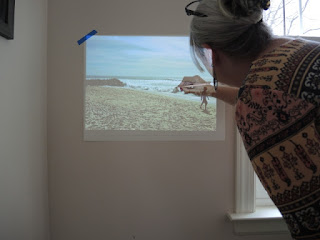 The next time I do this step, I will use a much softer pencil, maybe even use charcoal, because the colored pencil that I used left an impression in the paper that I wasn't happy with. 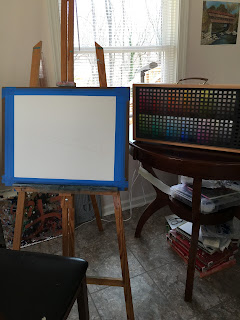 Then I taped the watercolor paper to a piece of wood that I previously had cut to a standard painting size. The  painters tape serves two purposes for me, it allows me to use water on the paper if necessary without getting a ripple in the paper...

It also allows me to mark the image area of my painting precisely and removal of the tape will leave a very clean painting when I am done. Since this is a pastel painting, you need to be mindful of smudging... 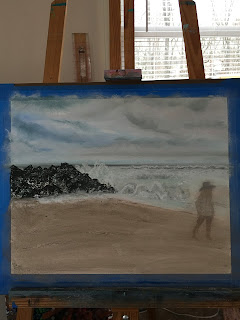 I had initially wanted to put a figure in the painting, but it just never worked out, so I gave up on that... 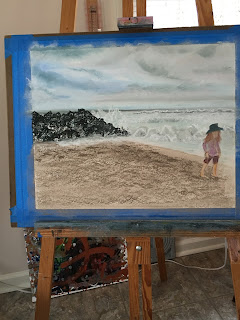 I like to say that she and I had artistic differences and that she stormed out of the painting. 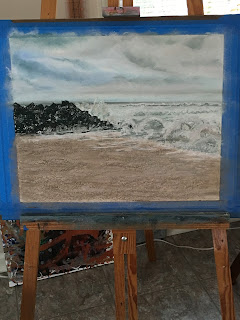 In the reference photo, the sand was full of footprints that I had decided to use for texture and part of the story of the painting, 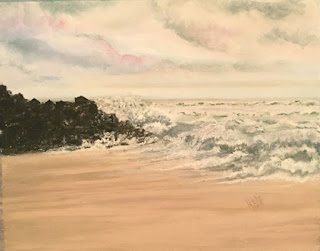 but in the end, I decided on smooth sand and turbulent waves...

It took me several days to complete the painting and in general I'm quite happy with it.  It was a practice piece and there are some things that may not be exactly "right", but that's ok.

Hope you like it. Tonight is the start of daylight saving time, so enjoy the longer days to come and remember to do plenty of art.
Posted by Susan at 1:19 AM 4 comments:

Well, it's me again crying and whining because I have a cold.

I had the pleasure of visiting my sister two weeks ago and I had a thoroughly good time. I love hanging out at my sisters' guest house, but this time I was invited again to stay at another friend's house and I decided to do it.

This friend happens to be a guy and he is really a good friend and we laughed most of the time I stayed there.  I felt really comfortable while there. There was one morning I wasn't sure about an aroma I noticed, but I figured out it was his dogs. They have no shame and never warned me at all when they were going to be flatulent.  Didn't they know I was a guest? How dare they. Humph.

I stayed in a part of San Diego that I'm not usually in and wasn't quite as intimidated by the drivers this time. I think I might be able to handle the traffic in this part of the county. I  normally don't drive when I go to visit my sister, but I'm getting braver, so next time...who knows?

Sister and I hung out with friends... 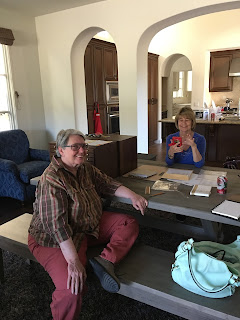 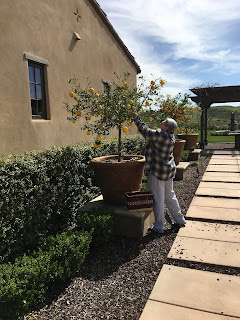 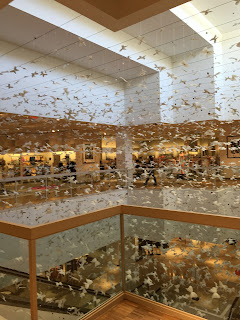 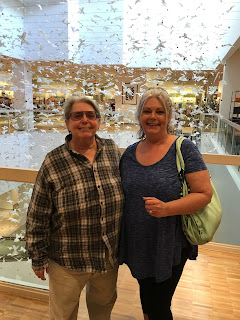 We went to the beach and took photos to paint and draw from... 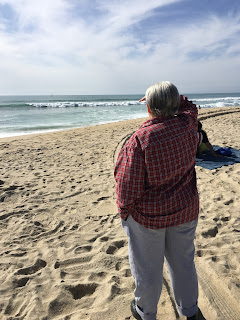 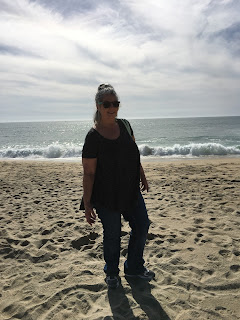 The waves were beautiful that day... 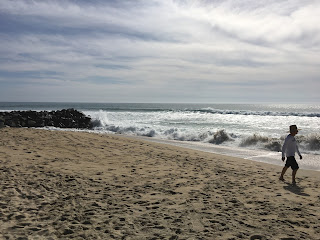 She even indulged me and took me to Poway to take a picture of the funeral home that was the setting for a reality show some years ago.

Anyone remember the show Family Plots? Well, of all the things I wanted to see, that was one of them... 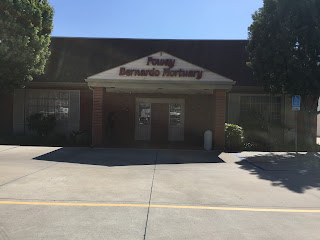 We had fun together, as we always do. I needed a break from the snow and cold weather that we have had here on the East Coast. I even extended my stay when the return flight I was on was cancelled before we even got off the ground due to a cracked windshield.  Finally got home, the only bad part about it was that my seat mate coughed and sniffed the entire flight home and so I'm blaming him for my cold. I got a sinus infection on the last trip out...perhaps I need to boost my immune system if I'm going to be traveling.

Weather is warming up here at home now and I'm much more likely to get back in the artist groove.  Sister is sending me a care package that has new pastels in it and I've ordered some new art equipment, so hopefully new and interesting art is in my future.  I'll keep you posted.

Take care and remember that art...it's just a walk in the park.
Posted by Susan at 12:27 PM No comments: